From a young age, David Ben Gurion, Israel’s first Prime Minister, used to say that the future of Israel is in the Negev – a huge Southern desert area covering about 40% of the territory of Israel. He always dreamed of settling the Negev and making the wasteland desert to bloom.

In 1952, on a trip to Southern Israel, Ben-Gurion passed by a small community with only a hut and a few tents. He ordered to stop the car and wanted to visit the place and to talk to the people. Told that it wasn’t so simple for a Prime Minister to just stop wherever he chose, he gave his aides two hours to arrange the visit.

Ben Gurion was highly impressed by the local people and their activities. When he asked who they were, they answered him that they were the members of the new Kibbutz - Sde Boker ("Shepherds Field" in Hebrew).

Ben Gurion, who was on uneasy terms with the pro-communist Kibbutz Movement of his time, was excited to realize that Sde Boker members were not part of that and considered themselves simply as pioneers of the land.

After coming back home, to Tel Aviv, he sent a letter to the community wishing them luck and confiding in them his "jealousy" of their humble lifestyle. So far so good, but he further admitted being envious of them and asked why he wouldn’t deserve to participate in a community like theirs.

Staggered by the request of the Prime Minister to join their small community, the kibbutz pondered the question of whether to accept Ben Gurion.

Not surprisingly, it was a big debate before a vote - on the one hand, having the Prime Minister would help, on the other hand, he was an elderly man. And, surely, who needed all his bodyguards at the kibbutz premises?

Finally, Ben Gurion was accepted with a margin of one vote and made Sde Boker his home. Two regular barracks were connected to give more space for the "First Couple".

Ben Gurion had a habit to threaten the members of his Cabinet every time they questioned his decisions. In 1953 he first sent a warning announcement in October and then traveled to Sde Boker and in December finally issued a resignation letter, without offering any explanation for that.

Immediately following that, he moved to live at Sde Boker with his wife Pola. As always, he shut the door behind him with a great noise! But this time his exile was short.

Already at the beginning of 1955, he decided to return to political life and assumed the post of Minister of Defense in the Moshe Sharett's government. Following the 1955 elections, he became Prime Minister again. 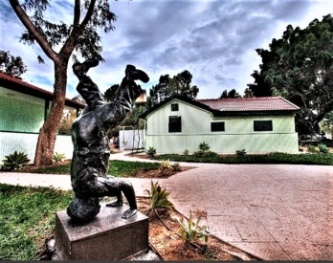 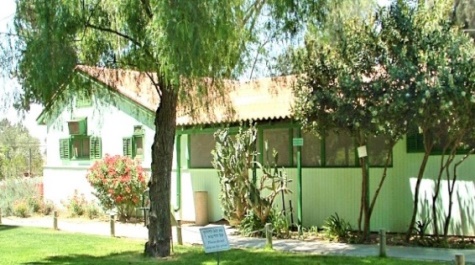 Sculpture of Ben Gurion standing on his head and his barrack

Under Ben-Gurion's leadership, his Labor ("Mapai") party won both the elections of 1959 and 1961, and he again served as Prime Minister and Minister of Defense.

In 1963, Ben-Gurion declared his resignation from both those posts at the Cabinet meeting. As always, his resignation was unexpected and shocked the public, but his decision was firm. Ben Gurion was replaced by Levi Eshkol.

However, even after his resignation, Ben-Gurion remained very active politically, first as Eshkol's close political ally, and later as his bitter rival. In June 1970 Ben-Gurion, at age of 84, finally retired from political life and returned to Sde Boker, never to leave it again for more than a few short travels. His wife, Paula, had died there in 1968, and he passed away on December 1, 1973.

Paula and David Ben-Gurion’s home has remained as it was left in 1973, fulfilling Ben-Gurion’s wish will, in which he instructed that their home should be open to the public: “I ask that the home in Sde Boker, which was my home until the day I passed away, shall be kept in its current state, including all furniture, books, and magazines that are in it”.

The house reflects Ben-Gurion’s unique personality and his very special views, and the exhibits demonstrate how his personal and public lives intertwined. His library includes over 5000 books in 9 different languages on a variety of topics. To be able to read ancient philosophy, he even studied Latin and Greek.

After visiting the Far East, Ben Gurion got attracted to Eastern Philosophy and Buddhism. He had great esteem for meditation, used to walk long distances every day, and was doing different daily exercises, including, obligatory, standing on his head!

Ben Gurion was very proud to be a "Kibbutznik", but all his attempts of being useful in the agricultural activities failed very fast. And also, while he used to praise the shared meals at the kibbutz canteen, he mostly ate at home. All that made him very lonely, and after Pola's death, he mostly used to talk to his bodyguards.

Sitting long days in his library, Ben-Gurion wrote books and articles that paralleled his political activity, including his memoirs that were written mainly with the hopes of inspiring Israel’s younger generation.

And also, he continued his attempts to influence public life and politics of the country, writing endless letters. Mostly, they have seldom been taken seriously.

The graves of David and Paula Ben-Gurion are located outside the kibbutz at the top of the hill and overlook a breathtaking view of the Tsin Canyon and the Avdat Highlands in the very heart of the Negev.

The twisting path to the tranquil gravesite goes through a beautiful park of carefully nurtured local flora, with the herds of ibexes peacefully pasturing at the green openings between the trees.

Views from the Tomb

But still, his and Pola' tombs stand alone, facing a sun-washed desert. Although there are always crowds of people, grown-ups and children alike, it is very quiet there, like everyone is afraid to disturb Ben Gurion's solitude,in life and death alike.