STROLL ALONG ROTHSCHILD BOULEVARD WHERE TEL AVIV WAS BORN

One sunny April day of 1909, a group of 66 Jewish families from Jaffa got together in the middle of nowhere. Surrounded by the sand dunes, standing under the hot April sun, they held a lottery, to ensure a fair decision, how to split a newly purchased wasteland onto private family lots. The head of the lottery committee was Akiva Weiss, an architect who had come from Kyiv three years before with a dream of building a modern Jewish city.

Together with another Russian immigrant and former Revolutionary, Meir Dizengoff, he wanted to create something impossible – to make this city looking like the European Metropolis, with electricity, running water and even the telephone.

The lottery participants first collected at the beach 66 grey seashells and 66 white seashells, and then wrote their names of the participants on the white shells, and the plot numbers on the grey shells. And then, a boy and a girl pulled the lots together, combining the chosen names with the number of lots. This is how the first Hebrew City was born at the place called today Rothschild Boulevard.

At one end of the Boulevard a Water Tower was built, to ensure that every house will have running water. And, at the other end a school was built, where over 750 boys and girls from all over the world would study the Modern Hebrew language and to make it a Mother tongue of the reborn Jewish nation. The school was proudly called Gymnasia Herzliya.

And soon a name was found for the new town – Tel Aviv ("A Spring Hill"). This is the Hebrew Name of the book, written in German by Theodore Herzl, the Father of the Zionist Movement.

The true development of Tel Aviv took off six years later, with the arrival of the famous Scottish City planner, Patrick Geddes. In response to the chaotic expansion of the city, Geddes was invited by the Municipality to present a Master Plan for Tel Aviv. In Geddes vision, Tel Aviv was to be a garden city, with public spaces in the form of parks and boulevards. 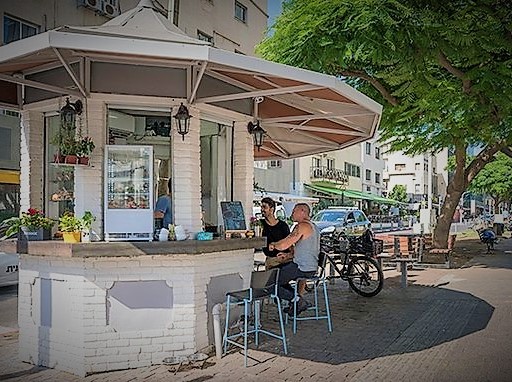 The city was growing and changing fast, but the major change of its landscape started in the early 1930-ies, with the massive Jewish immigration from the Nazi Germany. Those refugees brought with them the Bauhaus, or Modern Movement, style of architecture. The White City of Tel Aviv, which was declared a World Heritage Site in 2004, includes today over 4,000 buildings built in the Bauhaus style. Indeed, it sounds a bit ironical that the fans of the Bauhaus German Architecture have to come today to Tel Aviv, to enjoy it. And the heart of this White City Tel Aviv is Rothschild Boulevard.

At one end of the Boulevard stands a modest house built in 1910 as a home of Meir Dizengoff, the first Tel Aviv mayor. This is the “Independence Hall”. Here, on Friday May 14th, 1948, the State of Israel was born, when David Ben-Gurion made the Historical declaration of the Israeli Independence.

At the other end of the Rothschild Boulevard, where the first Water Tower once stood, stands today Habima Building, the home of the Israeli National Theater. The world's first Hebrew language theater, Habima was established in 1918 in Moscow. Upon coming to Tel Aviv, the actors gave an oath to perform in Hebrew only. This is how the Hebrew Theater was born.

Across the Habima Square stands the Concert Hall, simply called in Hebrew Heichal HaTarbut - the "Cultural Auditorium". This Auditorium is justly considered one of the most sophisticated cultural facilities in the whole world. When the Auditorium was opened in 1957, Leonard Bernstein conducted the Inauguration concert, directing the famous Israeli Philharmonic Orchestra, with the famous pianist Arthur Rubinstein, as a soloist.

This is how Rothschild Boulevard has become the cultural heart of Tel Aviv, with the Opera House, National Library and the Art Museum being only few minutes' walk away from the Boulevard, as well.

But someone needs to finance all that. And this is why there’s more venture fundings per person in Tel Aviv than anywhere else in the world. And as the best proof of that, the sky-rises standing along the Rothschild Boulevard host the most world famous banks headquarters.

And, surely, Rothschild Boulevard offers an excellent choice of unique street restaurants food street kiosks and cafes. They are always full of happy crowd enjoying all the possible kinds of a good food. But also, if you are in a mood for that, you can simply seat and eat on one of Rothschild Boulevard’s many shaded benches, where you’ll meet tourists and locals taking time-out from their daily routine to enjoy the Boulevard’s pastoral atmosphere and the city’s unique character.

Rothschild Boulevard, the Birthplace of Tel Aviv and of the whole State of Israel, the beating heart of the Hi Tech Industry and the home of world renown Banks; the Architecture and City Art Open Air Museum; the backbone of the White City Tel Aviv World Heritage Site; the home of some of the best Tel Aviv restaurants; and the major night life attraction, this is the center of Tel Aviv, the city which never falls asleep.